Nutanix software is so modular, that Nutanix software development team developed this module and plugged into existing modules (cassandra/stargate).
NEDE uses no-SQL database for indexing using already existing keyspace extentgroup map . We did not  even have to create a new keyspace.

Nutanix DR will be using NEDE to reduce the amount data transferred across the WAN.

NEDE eliminates the duplicate 4K blocks, so we have more space available in hot tier and memory, for unique blocks.

We have seen the need for it as more and more of our users migrate VMs from
other storage vendors to us ( where VAAI plugin snapshot or Linked Clone can't be taken advantage)  and reduce the usage of hot tier. CBRC (http://myvirtualcloud.net/?p=3094) is of some help but 2G cache is not enough.

Convergence and Dedup:  Dedup engine is distributed, and the data/indexing is localized based
as it is VM aware and less network utilization than centralized storage/SAN/NAS solution.


Content Cache: (new with this feature) refers to the <SHA1 Fingerprint> to <chunkData> cache. This will be on RAM+flash.

Overhead due to dedup:

Computing the index causes 10%  additional overhead on CPU. Indexing additional storage is
less than 1% in the table.

Seq Writes will be fingerprinted at 4K chunk size with SHA1. 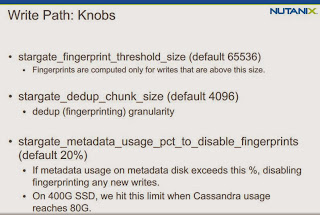 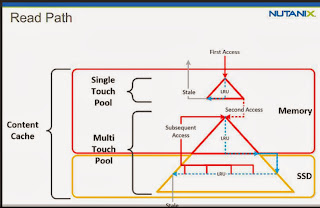 We have further LRU and hash tables, single touch and multiple  touch LRUs for memory
and flash chunks. I will explain this more later.

I will expand this blog after VMworld2013 - with various terminologies used and also
how this helps boot storms, virus scan,what percentage of hot tier usage is reduced.